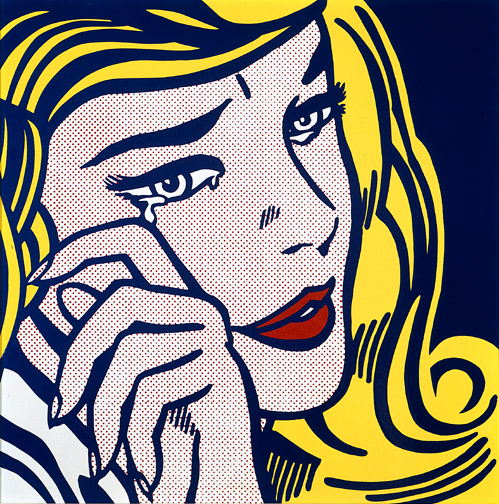 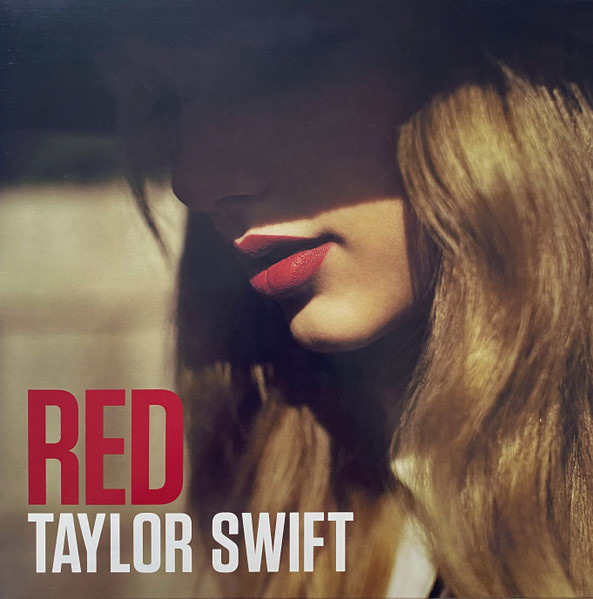 Roy Lichtenstein's paintings imitate comic strips, and chose this art style because it allowed him to portray darker emotional tones in a more calculated and digestible manner. 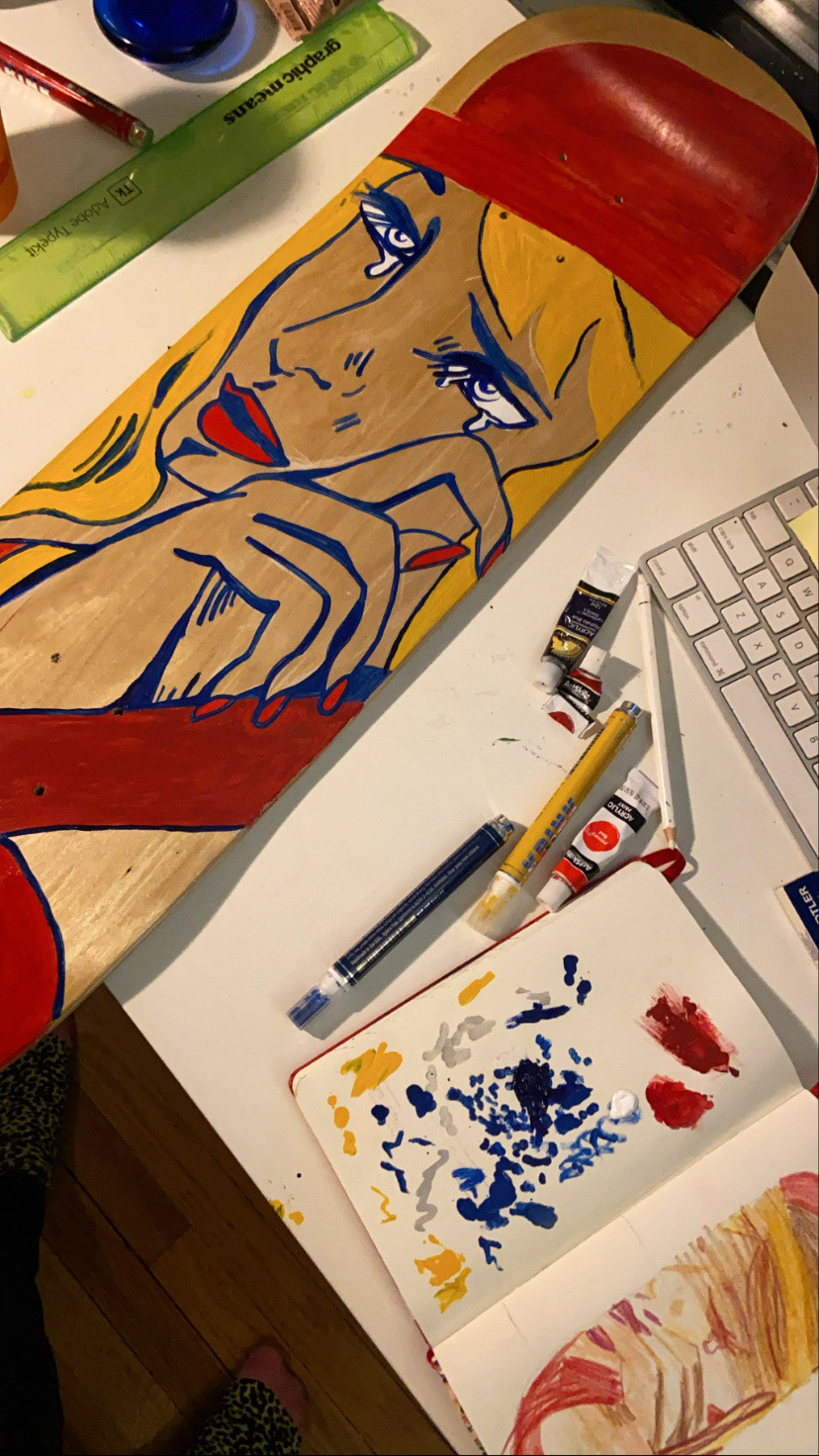 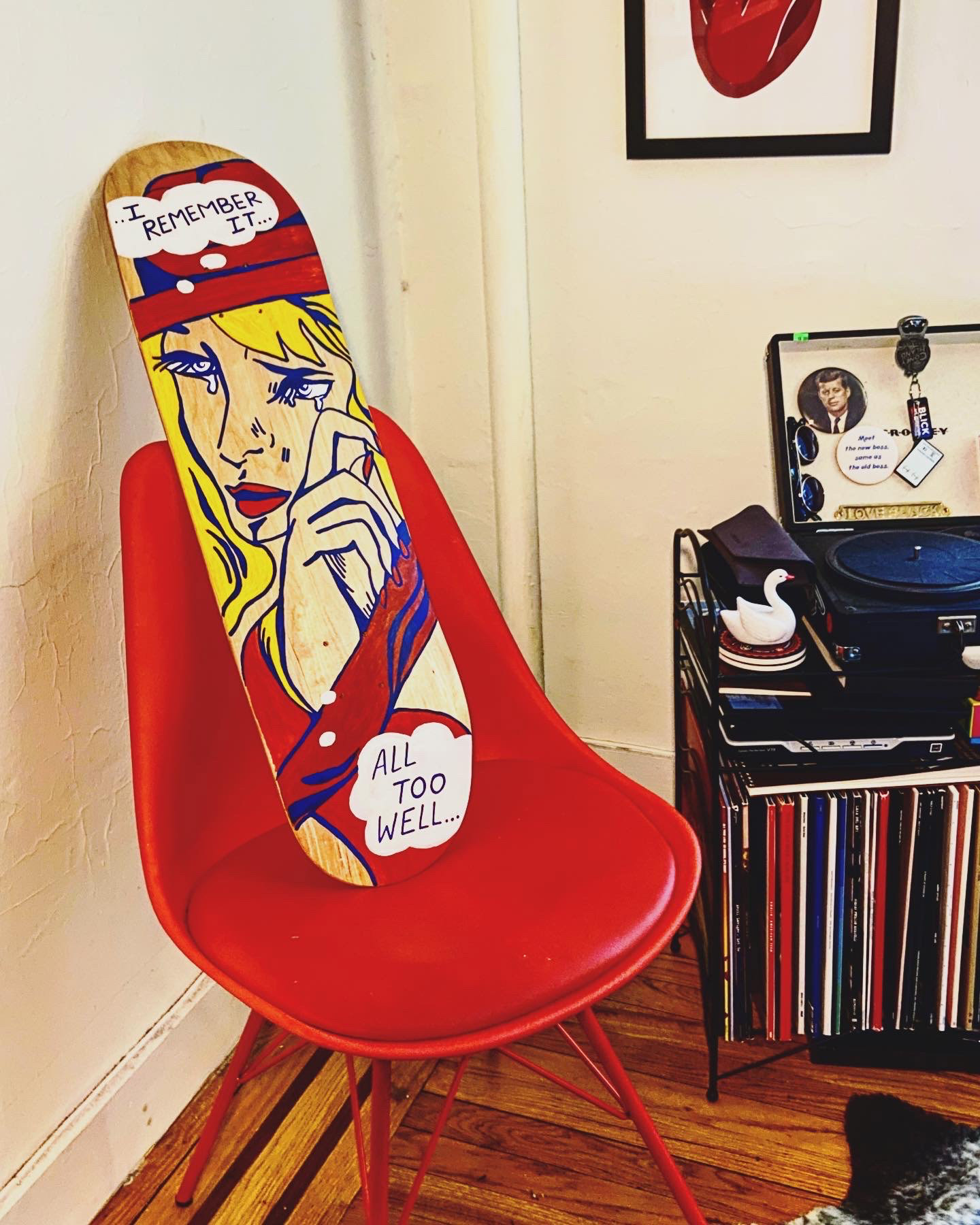 “[RED] is all the different ways that you have to say goodbye to someone...
every different kind of missing someone, every kind of loss...”
–Taylor Swift on the thesis of her album, RED (Billboard, 2012)
"Losing him was blue like I'd never known.
Missing him was dark gray, all alone.
Forgetting him was like trying to know somebody you never met...
But loving him was Red."
(Source: Taylor Swift, "Red" 2012)
"Crying Girl employs bright strident colors and emotions. In this case, the girl has bright yellow hair, and her lips and nails are painted a bright red color."
On the other hand, she is experiencing overwhelming emotion, as evidenced by the tears that fall from her lower eyelid."
(Source: Public Delivery, 2022)
In 2021, at the same time I painted this piece, Taylor Swift re-recorded and re-released her RED Album out of frustration and concern that she had lost her own agency. Her re-recording project would eclipse her prior work and image that had been commodified by her past lovers and male-dominated record label executives.
Years of Swift's narrative were cemented by her most emotional and public relationships, and her work thrived when writing about such experiences. Experiences sung by Swift on RED are done in the safety of hindsight, revealing how valuable love and life experiences come and go, but remain forever tainted by broken promises, shortcomings, pressure to stay silent in adversity, and an unwillingness to compromise by her partner.
Her well-constructed words of mass destruction through mass emotion granted her a spot in the Songwriter's Hall of Fame even prior to RED's release. She has been labeled as a poetic genius for writing such honest and evocative songs, while also garnering criticism for ruminating on brutal emotions for the sake of "content" and has made headlines since for slandering the egos of men who have wronged her.
Taylor Swift became America's "Crying Girl" – her successes in her musical and personal life also painted her in a light that would haunt her for the next 10 years: one seen as witty, down-to-earth, relatable, successful, yet still too overly emotional to be taken seriously.
Colorful, but ultimately, broken.
"And I know it's long gone
And that magic's not here no more
And I might be okay,
But I'm not fine at all."
"And I know it's long gone
And there was nothing else I could do
And I forget about you long enough
To forget why I needed to."
(Source: Taylor Swift, "All Too Well (Taylor's Version)" 20)
"[Lichtenstein​​​​​​​'s "Crying Girl"] also highlights the struggle beneath the glamour of an American girl.
While she has a beautiful appearance, beneath that exterior lurks miserable emotions that are a sign of her struggle in the male-dominated society at the time that demanded perfection from girls.
The stressed look and tears hence are an outlet for this struggle and misery."
(Source: Public Delivery, 2022)
Can a woman cry for help,
without asking for sympathy?
The "All Too Well" lyrics featured in my piece reference Roy Lechtinstien's one-panel comic book panel paintings. These depictions of women in treacherous situations still carry a tone that rejects help from anyone who may wrong her. 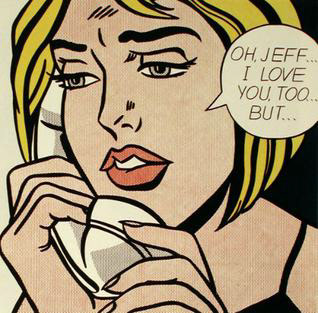 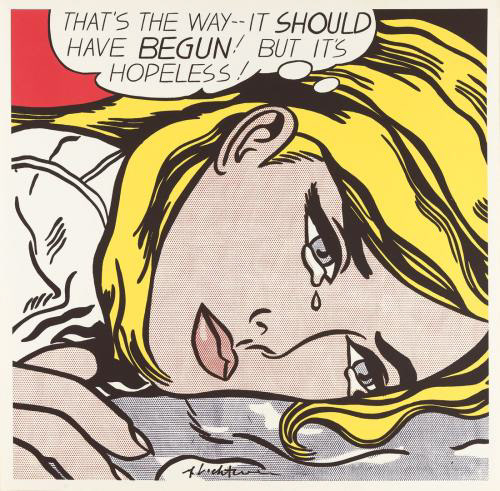 LEFT: "Hopeless" (Roy Lichtenstein, 1963)
RIGHT: "Oh, Jeff...I Love You, Too...But..." (Roy Lichtenstein, 1964)
I chose a skateboard as my canvas for a few reasons.
Skateboarding helps you move about the world, but you must push yourself in order to do so while paying attention to the road ahead of you and adapting accordingly. You could apply this same advice endurance of moving on from an era of your life. 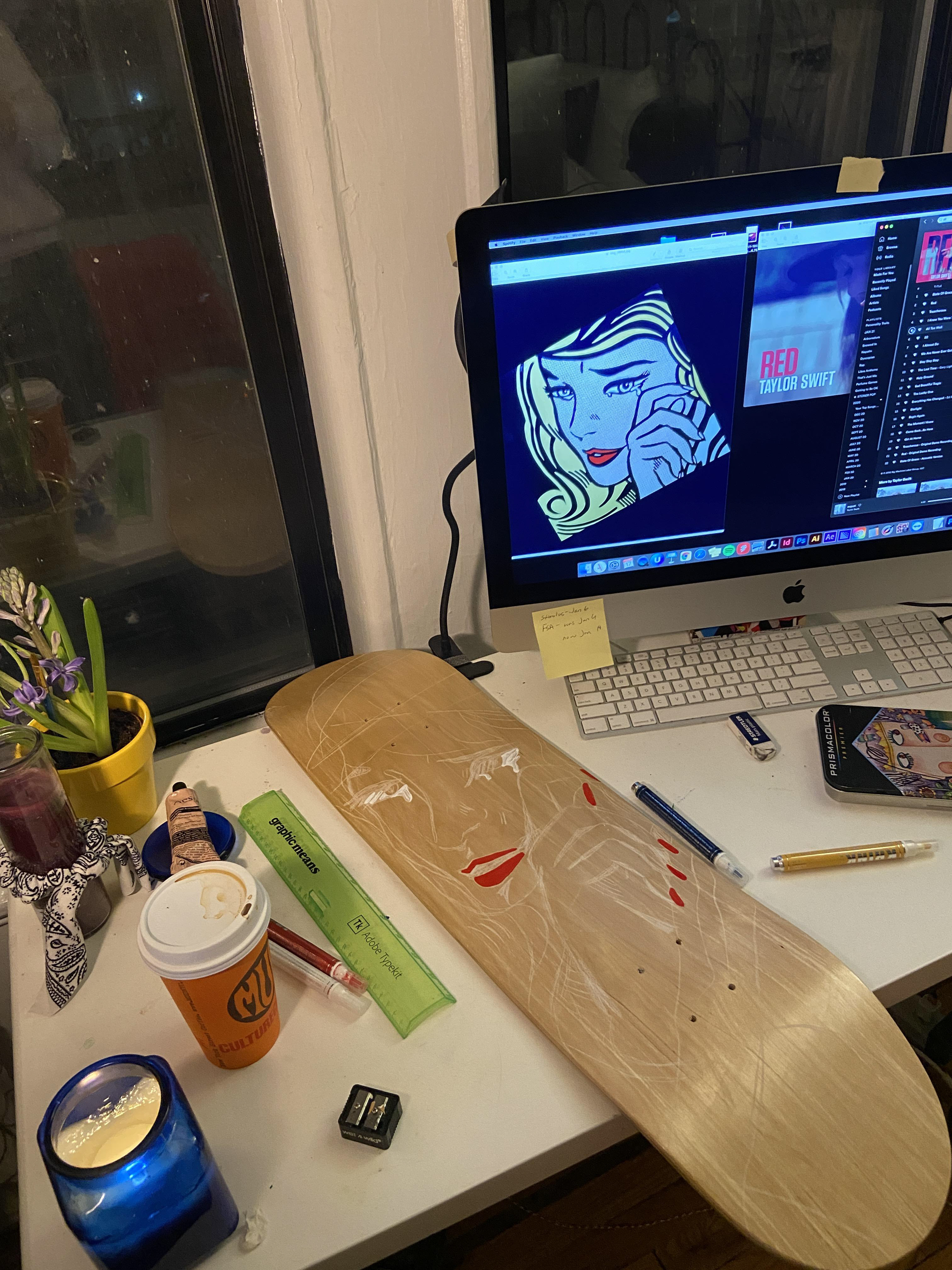 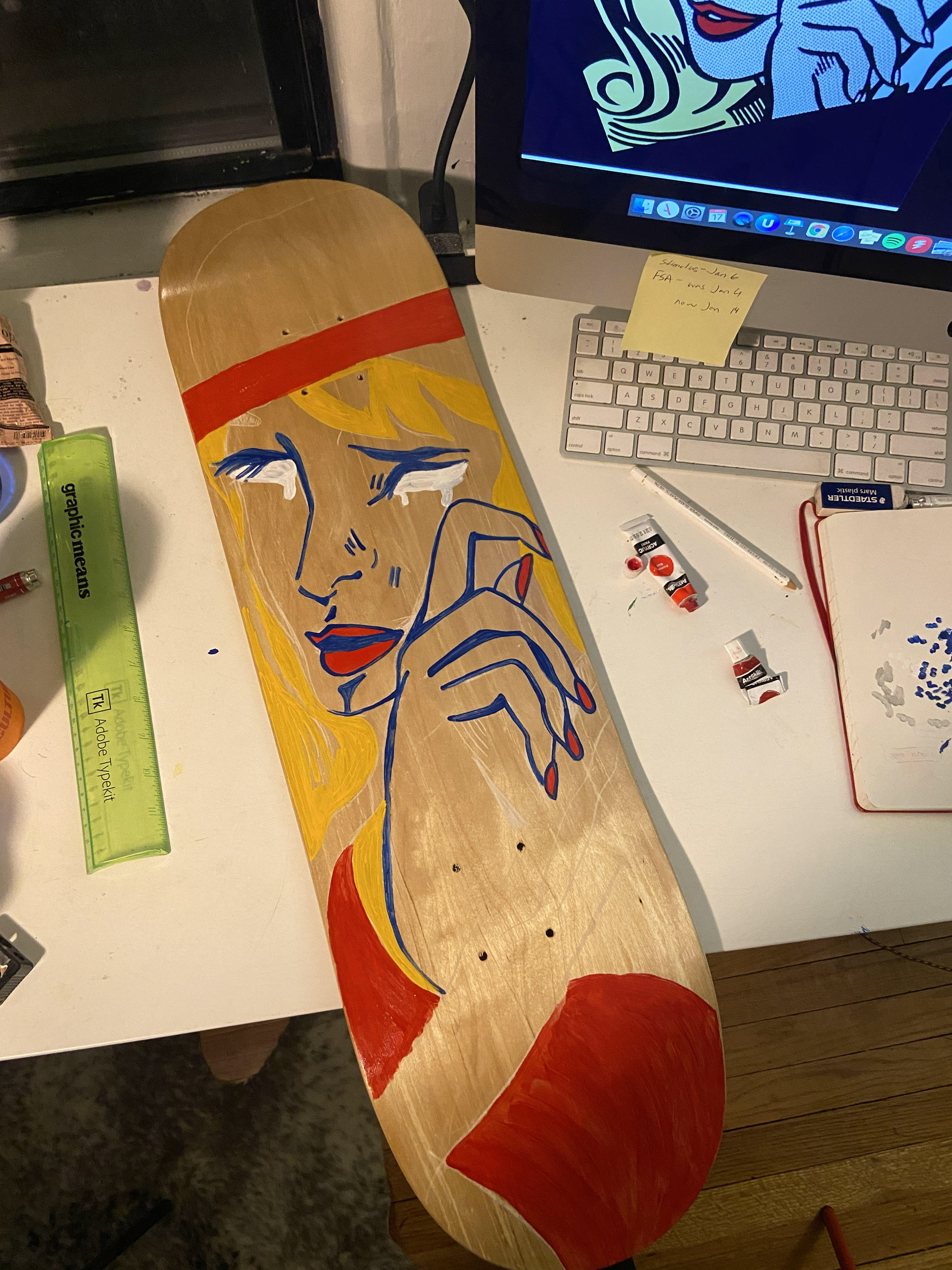 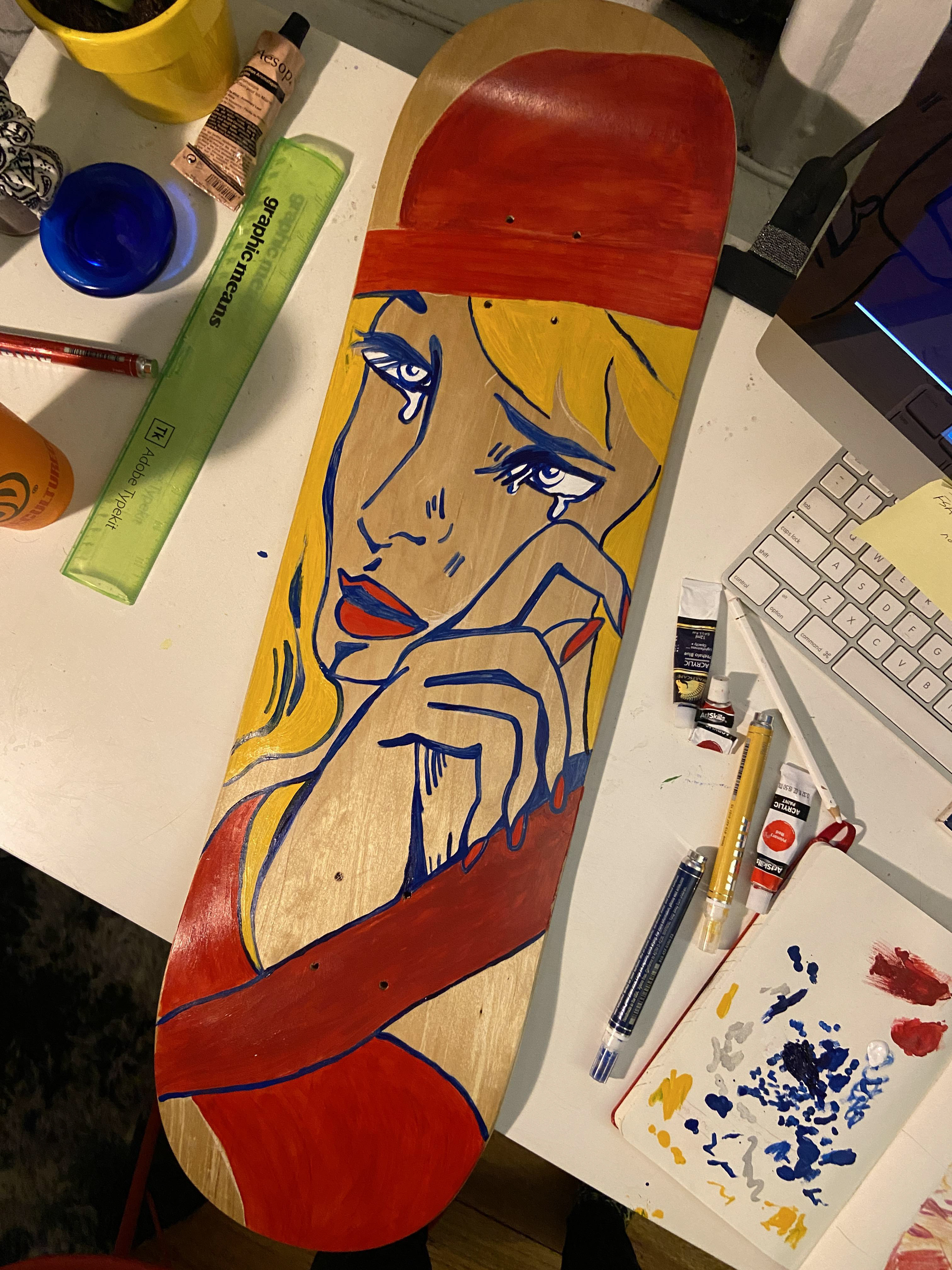 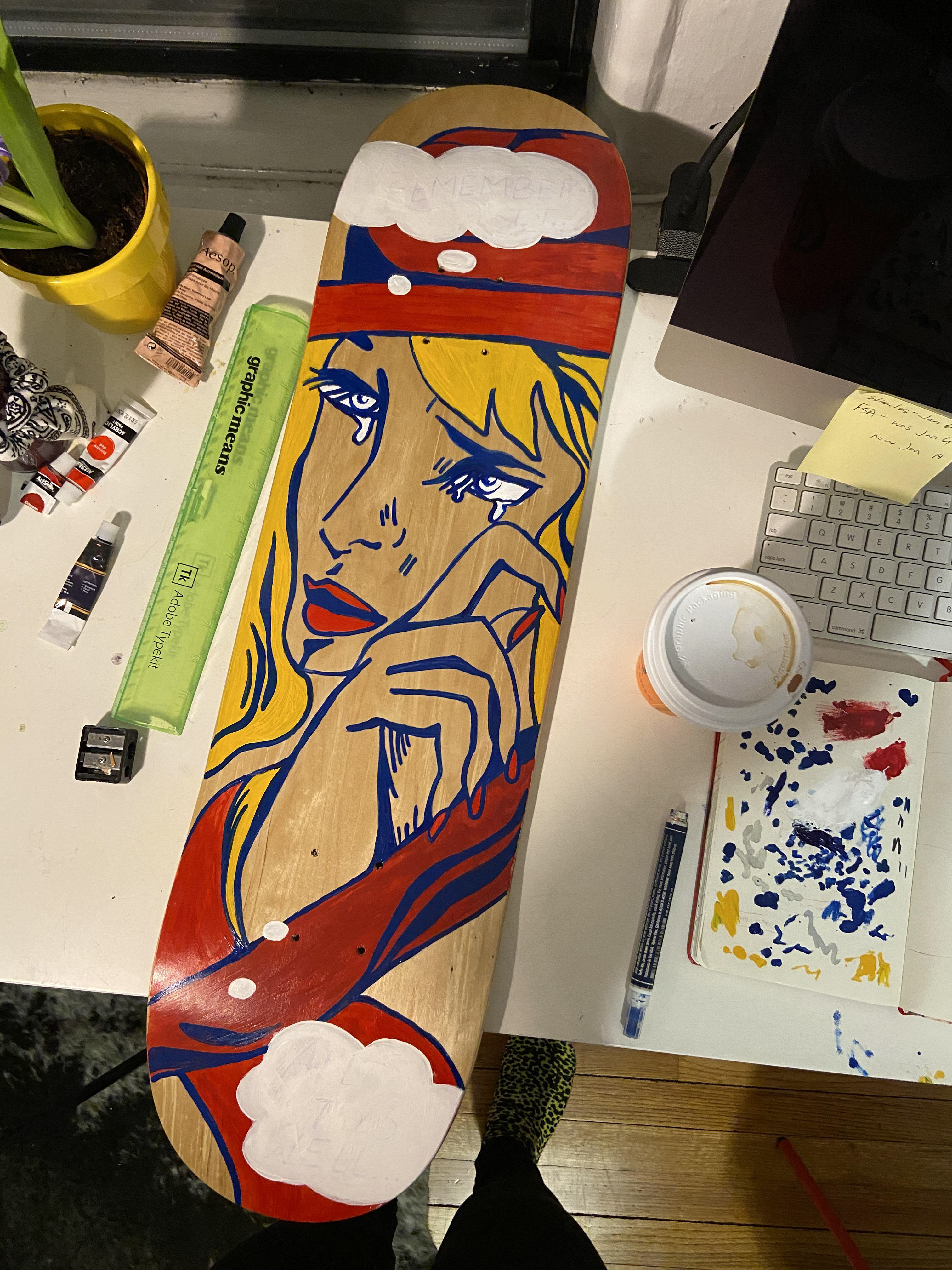